In the last part, I wrote about Model-View-ViewModel (MVVM) and its structure, together with an implementation of the same sample movie search app I introduced in the first part of the series. As mentioned in part 4, MVVM is chosen by Google as the standard for writing android apps owing to its advantages over other architectural patterns. The architecture components introduced in Google I/O 2017 and now as part of Jetpack libraries in Google I/O 2018 help with better and cleaner development of this architecture in android, taking into account OS characteristics such as activity/fragment lifecycles, saving state, etc.

So from this part on, I am going to focus on MVVM and implement the same movie search app using architecture components.

The screenshot of the app is shown below. The user enters part of a movie name and the app looks it up on the network and returns the list containing the search term. 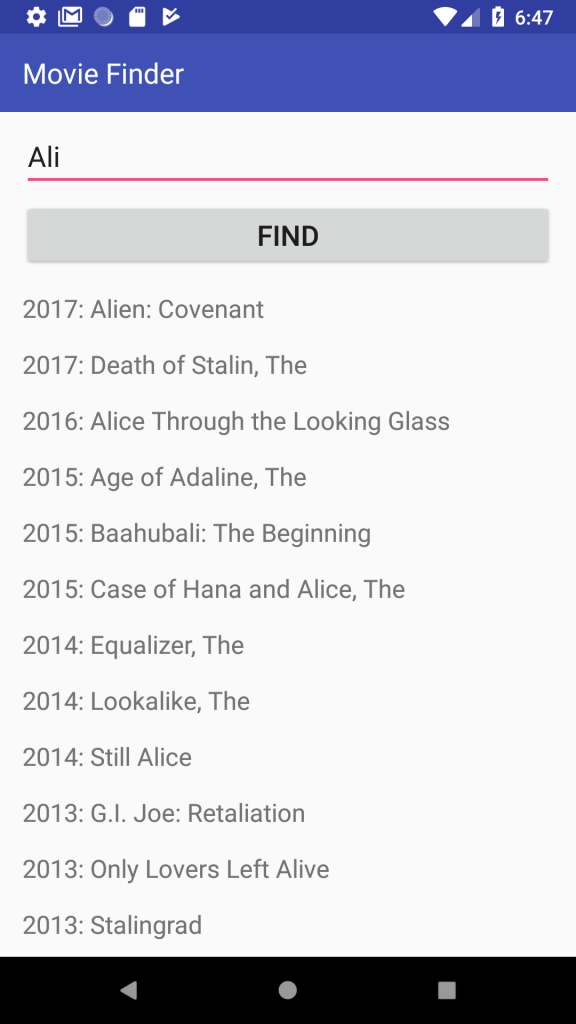 I will not deal with ViewModel  architecture component in this post. Detailed discussion on ViewModel  is the subject of the next part, which shows its combined application with LiveData .

The full source code corresponding to this post is in the ‘mvvm-livedata’ branch of my Github repo here.

Let’s first review the observer pattern in MVVM, with reference to the movie search app:

It has three components:

How RxJava  fits within the above

Similar observer is also defined in the View for the unsuccessful responses from the server.

For details of the code please refer to part 4 of this series or the ‘mvvm-rxjava’ branch of my Github repo.

How LiveData  fits within the above

LiveData  is another tool for implementing the observer pattern. So similar steps as in RxJava can be carried out herein:

When using LiveData , the OS automatically disposes the subscription in onDestroy()  of the observer’s activity and thus avoids memory leak and possible crash.

So why   LiveData  over RxJava  in the architecture components?

We already saw here that LiveData  is not an essentially different tool to RxJava , so why was it introduced as an architecture component when RxJava could have easily managed the lifecycle by storing all the subscriptions to observables in a  CompositeDispoable  object and then disposing them in onDestroy()  of the Activity  or onDestroyView()  of the Fragment  using only one line of code?

Well, yes, it could, but that would need first overriding the relevant lifecycle methods besides having the basic lifecycle knowledge. This still might not make sense for some, but the fact is that according to one of the Jetpack sessions in Google I/O 2018 many developers find lifecycle management complex. The crash errors arising from not handling lifecycle dependence might be another sign that some developers, even if knowledgable of lifecycle, forget to take care of that in every Activity / Fragment  they use in their app. In large apps this could become an issue, notwithstanding the negative effect it could have on productivity.

The bottom line is that by introducing LiveData , larger number of developers are expected to adopt MVVM without even having to understand the lifecycle management, memory leak and crash. Even though, I have no doubt that LiveData is not comparable with RxJava in terms of capabilities and the power it gives to developers, reactive programming and RxJava is a hard-to-understand concept and tool for many. On the other side, I do not think LiveData is meant to be a replacement for RxJava–it simply cannot–but a very simple tool for handling a controversial widespread issue experienced by many developers.

In part 7 of the series–I KNOW THIS IS PART 5 NOT 6 :-D– I will show a simple example where using LiveData leads to unexpected result and how RxJava comes to rescue.

This finishes this part on LiveData . In the next part I will write about ViewModel  as another architecture component.